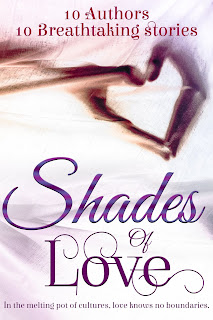 
== SYNOPSIS ==
Whether prince or pauper, beauty or beast, cupid entangles unsuspecting hearts. From the exchange of a glance to the throes of romance, follow these couples as they discover that love has no limits. Indulge your taste for adventure with ten diverse tales from familiar and exotic parts of the globe. Shades of Love is brought to you by a select group of award-winning and best-selling writers, whose stories feature couples who close the cultural divide through their love.


== NOVELS INCLUDED ==
Reana Malori - Claiming Lana
Jake Bradford and Lana Miller are two strong-willed people who seem to be sworn enemies. That all changes in the blink of an eye when they’re thrown together for an important project. When passion simmers just under the surface, the outcome is not what either of them could have expected, but exactly what they needed.


Suzette Riddick - Caliente Nights
Nursery school teacher Jeanette Adams and athlete Alonzo Castro are immediately attracted to each other. He is aware of his Cuban mother's disapproval, but it's not enough to keep him from pursuing the African American beauty.


J.L. Campbell - The Blind Shot
Kofi Danquah and Regina Chu are settlers in a foreign land, but the one thing they have in common is their attraction to each other. As their relationship moves from platonic to passionate, so does their families’ opposition to their love … but Kofi and Regina want what comes naturally and they won’t be denied.


Annamaria Bazzi - When East Meets West
Winter Portobello, a coed from a faith-based Italian family falls in love with a fellow student, Samir Chamas, a Lebanese immigrant. Together, Samir and Winter must prove their love to be as strong as the hearts that bind them, despite the cultural and religious differences that threaten to destroy the Chamas’ family.


Janae Keyes - Would Smell As Sweet
Sick of feeling like a prisoner in her own home, Shayna moves the small town of Cotton Springs, Texas. She puts the pieces of her life back together and finds romance, but Happily Ever After only lasts until Shayna's stalker finds her hiding place and turns her dream into a nightmare.


Toye-Lawson Brown - Postcards from Havana
Arlene Joy never expected to win a five-day trip to Havana, Cuba. After meeting Arlene at a fiesta, Vincenté Martinez is happy he came home.


P.C. Zick - Third Base
Baseball star Tomas Vegas loses focus on his game when he meets Adriana Moretti from a tight-knit Italian family. When she falls for the handsome Puerto Rican, their families attempt to pull them apart, which only brings them closer together.


Hebby Roman - The Best Game
After years apart, Liana De Leon and Damian Escobedo meet again in their San Antonio hometown. Liana wants to escape her high-profile life, but coming home isn't working out the way she planned. Instead of the quiet life she envisions, the city's most eligible bachelor is set on winning her heart and making all her dreams come true.


Caroline Bell-Foster - Small Town Boy
They were first loves, but tragedy struck before Kerry and Noah could explore their lives further. Years later, can the British politician and the American Country singer ever re-connect?


Stacy-Deanne - Sometimes Money Ain’t Enough
Raquel Hood has everything a woman could want; money, beauty, and an entire town under her command. But after meeting Tobias, Raquel realizes that sometimes money ain’t enough.
#ShadesOfLoveBoxSetRelease