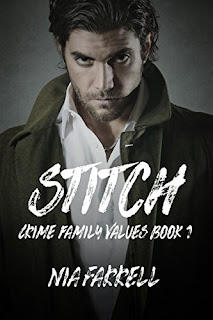 Tag Line: Beth Shelton will do anything to stay alive and be with her son, even if it means marrying into the mob.

Mini-Blurb: When physical therapist Beth Shelton is kidnapped by a wounded man who mistakes her for a doctor, she finds herself in the middle of Godfather Four. 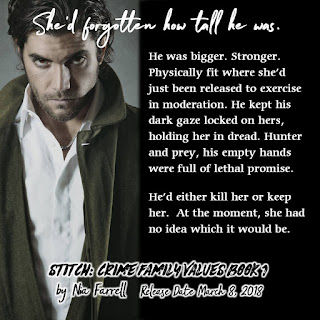 Blurb: Physical therapist Bethany Shelton is supposed to be dead.  That was the plan when Matteo Visconti kidnapped her by mistake, thinking that she was a doctor. He survived the infection after she took the bullet from him, but he left it to his mob boss father and assassin brother to finish her.

Except they didn’t.  After a long, futile search for the man who shot him, Matteo learns that Beth survived and he’s a father.

Beth will do anything to stay alive and raise her son.  Matteo doesn’t hesitate to drag her down into his world.  He’ll make her want to stay despite the danger, despite the pain.  But when you marry into the mob, you don’t just get a crime family.  You get their enemies, too. 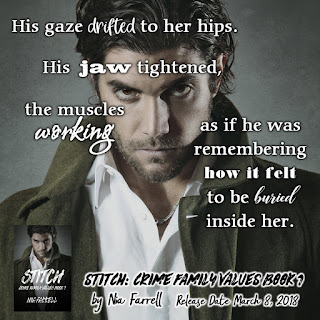 His physical therapist was proving to be an enigma than begged solving.

Discomfited by his study of her, she stepped back and turned to leave.

“Broth,” she answered.  “We’ve got to start building you back up, and you need something for the pain.  I’ll be back as soon as I can.  I’ll see if I can find a bell or timer, something you can use that I’ll hear if I’m not in the room.  If I can find canned broth or bouillon, it shouldn’t take long.  Ten or fifteen minutes tops.”

She came back with another tray, loaded with two coffee mugs of broth, a sleeve of saltine crackers, all of the analgesics that they’d bought, and a digital timer that he could punch and sound an alarm a second later.  She had also brought another kitchen towel to use as a bib.  Looping it around his neck, she secured the ends with a small bag clip and picked up the first mug of broth.

“You strike me as a beef man but you’re getting chicken to start.  If you can keep down liquids, after an hour or so, we’ll try crackers, then pain meds.  Otherwise, they’re just going to eat your stomach before they come back up.”

As much as he’d love to argue with her, he knew that she was right.  He had to be wise about this.  That included governing his body’s reaction to her whenever she came near.  One whiff of her skin and all he could see was how she looked naked, unaware, and vulnerable, totally at his mercy.  He could have done anything that he wanted, but that would have made him no better than Reaper.

Even crime families had values.

He’d left her pretty much alone—although he’d felt one of her breasts, to see if they were natural or enhanced.  She was built like a swimmer or runner, with toned legs, a trim waist, and beautiful C-cup breasts.  Her nipples were a soft, rosy pink.  The nest of curls at the juncture of her thighs was two shades darker than the crowning glory of her long, brown hair. 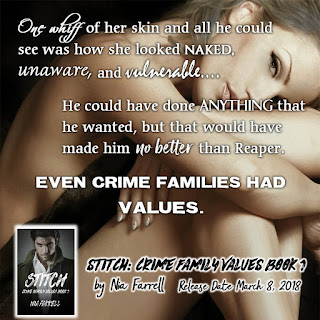 She had braided it to keep it from misbehaving.  He wanted to see the waist-length curls flowing down her naked back and teasing the dimples at the top of her shapely hips.  He wished that she would whisper his real name, the one that he could not tell her, just in case she decided to split.  He wanted her to offer him something far more satisfying than tepid water and warm broth.  He could only imagine what it would feel like to possess her, to drive his cock inside her until she shattered in his arms.

Maybe before this was all over…

He was dreaming, of course.  This could only end one way for her.  Beth Shelton would eventually have to be dealt with, which was too bad, really.

He needed her to survive, but he couldn’t afford to let her live. 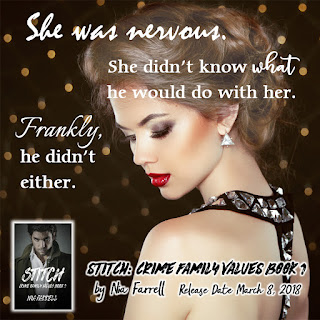 “I shouldn’t want you,” he grated, his breath still minty from when she’d helped him brush his teeth after supper.  “But I can’t stop thinking about you.  With the cashier.  With that mother at the checkout.  You, without a stitch, lying on the seat of my SUV, looking so peaceful.  So pure of heart.  I promised myself that I wasn’t going to touch you again.  You don’t know who I am.  What I’ve done.  What I’ll have to do as soon as I can go again.  There’s a monster out there who needs put down.  He takes women, shares them with his club, and kills them.  He raped my cousin.  I promised to avenge my family’s honor.  I failed once.  I won’t rest until he’s stopped.”

Matteo was not the kind of man that most parents envision for their daughter.  He had no qualms about killing someone who deserved it.  He was willing to be judge, jury, and executioner if it meant that justice would be served when the legal system failed.

The intensity in his eyes was mesmerizing.  She wet her lips and swallowed hard.

“You should have run away as far and as fast as you could go.”

“It was empty.  It’s still empty unless you found bullets and reloaded it.  But I needed help.  I’m just sorry it was you.”

He thrust himself against her hand.  Beth realized that her fingers were still wrapped around his girth, or as far as they could reach, anyway.

He had needed her, but the nature of his needs had taken a very carnal turn.  In another time, another place, she might have been seduced into having a one-night stand with a handsome, well-dressed man possessing an air of danger and an impressive cock.  But now…

If she fought him, she could hurt him.  If he didn’t take it easy, he could start bleeding internally again, and this time, she might not be able to stop it. 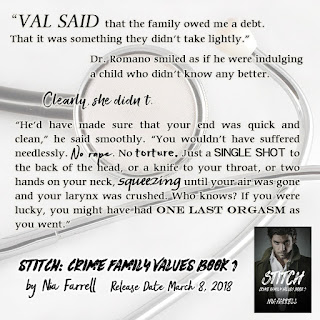 Would it really be so bad, to give herself to him just this once?  No right, no wrong.  Nothing but elemental need and what it took to assuage it.

“You were my angel of mercy,” he murmured, his voice grown rough with desire.  “Have mercy on me now.”

He cupped her head and urged her face down to his.  Rather than risk hurting him, she surrendered to her own rising passion.

They came together with opened mouths and parted lips.  Tongues thrust, twining around each other in a dance as old as humankind.  Forsaking her hold on his manhood, she unzipped her pants, hooked her fingers in the tops of her panties, and shoved everything down.  Kicking them aside, she climbed on the bed and straddled him, riding the ridge of his cock and stimulating his length while his mouth continued to consume hers.

He claimed one breast with his good hand, splaying his large fingers, rubbing and squeezing it.  Her hardened nipple prodded his palm.  Catching it between his fingers, he rolled and tugged on it, a pull that she felt all the way to her core.

She threw off her shirt, wanting to feel his mouth on her breasts.  Pushing them together, she offered herself to him, rising up to meet his mouth and welcoming the feel of his lips claiming one, then the other.  He took a nipple between his teeth and teased it with his tongue, licking, flicking, curling around it and sucking it inside.  He feasted on her flesh like a starving man, a desperate man, a wounded man with an uncertain future, seeking to make the most of the time that was left to him.

She didn’t want to think that he might die.  She wasn’t ready to accept that this might be the last act of his life.  The last time that he’d know the joy of a woman’s body and the comfort of her touch.  She gave it to him, all the while bargaining with God to do what He could to save him.  He might be a dangerous man, but he wasn’t a bad man.  Not really.  He was lonely and vulnerable and likely as scared as she was that things might not end well. 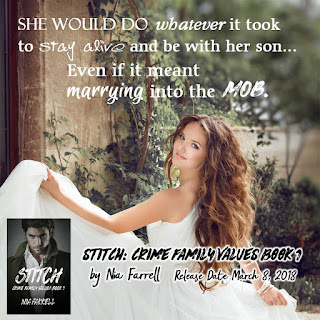 “It’s okay,” she whispered, seeking to reassure him when he pushed down the front of his sweatpants and freed his cock.  “It’s okay,” she said when he bent his knees and started to enter her, skin to skin, with nothing separating them.  She wasn’t about to raise the subject of condoms with a man who might be dying.

He claimed her in one desperate, searing thrust that took her breath away.

Matteo Visconti is a desperate man.  Freshly wounded with a bullet in his shoulder, he’s sworn to hunt the man who put it there, but first, the bullet needs out.  He kidnaps a doctor from a convenience store at gunpoint, intending to kill her when her usefulness is done.

Bethany Shelton is only a physical therapist, but she manages to remove the bullet and save Matteo’s life.  It’s too bad that he can’t afford to let her live, not even after they’ve had one desperate joining.  Forced to call for help when infection sets in, Matteo leaves Beth’s fate to his father, Dom Visconti, and his assassin brother Val.

After months of futile searching, Matteo returns home for Italian Fest and learns that Beth is alive.  His father gives him the choice to keep her or kill her.  When Matteo goes to her house, intending to take what belongs to him, he learns that they have a son.

In this darker, dubious consent Mafia romance, Beth will do anything to stay alive and raise her child.  Matteo doesn’t hesitate to drag her down into his world.  He’ll make her want to stay despite the danger, despite the pain.  But when you marry into the mob, you don’t just get a crime family, you get their enemies, too. 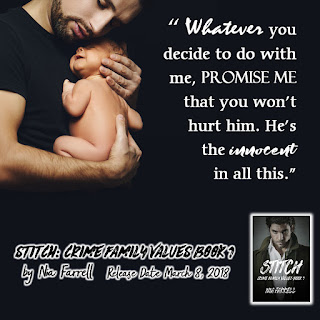 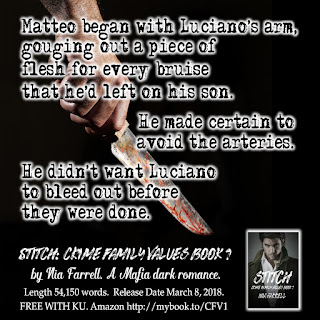