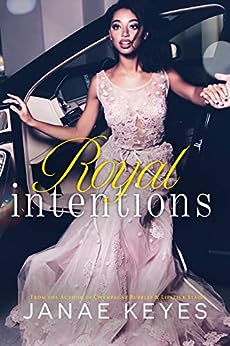 This was my Cinderella moment, it was midnight, and I had to depart the palace before the spell wore off.

For Dr. Whitney Young Ph.D., running away from her painful past was secretly her motivation. The further away she was from her family the better, and a teaching opportunity in the country of Vauxlance was precisely what she needed to keep her far away and focus on her career.Prince Philippe De Le Stefan is the crown prince of the small western European country of Vauxlance. He’s also filled with pain due to the mistakes of his past. He’d give anything to be free of the guilt that plagued him.A chance meeting at a lavish party brings together the two broken hearts of the economics professor and the prince.Caught up in the excitement of romance, fast-paced lifestyles, celebrity, and academics, can the dynamic couple survive the pressures placed on them by outside and internal influences?

ＥＸＣＥＲＰＴ
“My apologies, your highness,” I said addressing him.
“No need to apologize and please, call me Philippe.”
“So,” I paused. “Philippe.” The moment his name rolled off my tongue I saw the way his eyes burst into light, the way his body language shifted as he leaned into me. “Being crown prince and finance minister, that is a serious amount of responsibility.”
“That it is,” he confessed. “Though being prince isn’t much of a job.”
He’d taken my hand back into his and we continued our stroll up the incredibly long hallway. I swore it had to run the length of the city block outside. I was walking hand in hand with a prince and in a palace. The energy that flooded me was all consuming. I wondered if this was how Diana felt for the first time with Charles, Kate with William, or Megan with Harry. There was an unmistakable connection forging between the two of us who’d only met a short time ago.
I took one step at a time until my foot stepped down on something hard and slippery. My body lurched backwards and I went tumbling toward the ground, yet I never hit the ground. Philippe acted quickly and yanked me to him at a rapid pace. My body pressed to his. His physique was rock hard and his strong arms held onto my body tightly. My heart stopped, and not a single breath left me.
Philippe’s face was inches from mine, his olive eyes searching mine for signs that I was okay.
“I’m fine,” I breathed as his hand gripped tightly at my waist. I relaxed into his hold, he was protecting me as if I was a precious piece of crystal.
Philippe’s eyes diverted from my own, and he observed the floor. He took his foot and kicked away a single marble. The small glass ball rolled across the carpet and onto the exposed stone floor before resting against the wall.
“My little brother,” Philippe grunted in dismay.
“You have a brother?” I questioned. Honestly, I didn’t know much about the royal family, and the only child I’d heard of was Philippe.
“Yes, he’s 12.” He nodded in the direction of a portrait of the current royal family. King Olivier standing tall, his wife Julianna seated with a baby boy on her lap. Next to Julianna stood who I assumed to be Philippe, he was an older teenager, but in front of him also stood a small girl.
“You have a sister as well?” I asked, noting the little princess in the painting.
“Had,” he commented, his voice filled with sadness. I glanced up into his face, it was hardened and filled with emotion. I aimed to comfort him. I leaned into his chest and rubbed my hand along his back. “She died when she was seven, a tragic accident while our family was vacationing in France. It was a devastating loss to our family and the country.”
“I’m so sorry for your loss,” I expressed as his eyes greeted mine. He gave me a weak smile in response.